mmm…I’m afraid that we are not starting painting yet.

There is one more process that we have to go through before we paint.
That’s washing which is called “Mizumoto” in Japanese.

We used to wash cloths in the river such as the Kamo river, Horikawa river and Katsura river in Kyoto.
But it’s been banned to wash off glues or dyes in the river due to Water Pollution Control Law since 1971. 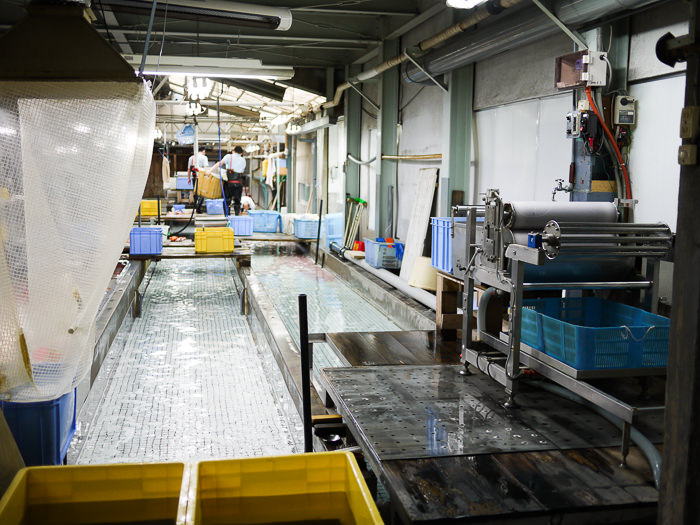 Today, the clothes are washed in those artificial river like a pool.
This is about a couple meters in width and 10 meters in length.

Why do you wash?

That’s because water washes off glues and extra dyes.

We put glues on silk before dyed the background color.

As we mentioned in the articles, the reason why we put glues on silk is to cover patterns with rice starch to prevent them from coloring.

But now we don’t need these glues anymore after we finished dyeing.
So we need to remove it by washing.

Steaming is the process to stick colors(dyes) on silk. It looks dyes are fixed there, but it’s not completely stuck them so unstable dyes are washed off in running water.

Any water is fine?

No, it’s not.
Water is drawn from underground in Kyoto.

The water temperature is stable

As you know, tap water is warm in the summer and cold in the winter, isn’t it?
Then the water temperature is not stable.

But the temperature of ground water is stable(around 18 degrees).
That helps workers work in the same environment, which is nice.

Chemicals help to prevent the color of dyed cloth from coming out well.
Especially, chlorine may make it turn to be greyish.

Also if water contained iron, it could turn to be dark reddish.
Therefore, underground water is essential for washing because its water quality is stable and contains less chemicals.

Washing needs a large amount of water.
It’s not hard to think of how expensive it would be if tap water was used for.
The workers told us they dug over 10 wells in case of the lack of water. 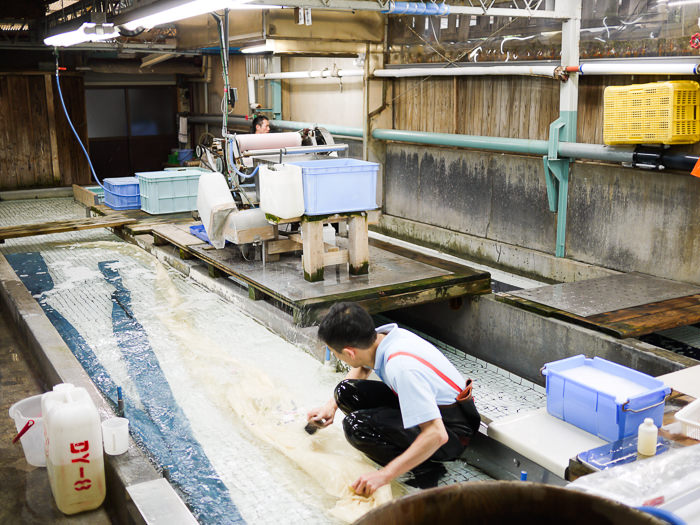 He works in water all day long.
The manger told me that working in water was really tough so that only young people could work there. 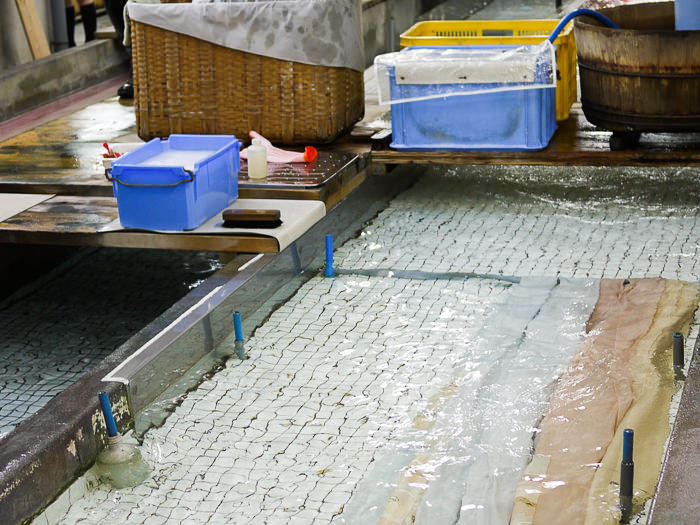 Unless clothes are soaked in a generous quantity of water, it is not able to remove the dried glues.
Making them soft by soaking in water for 5 minutes. 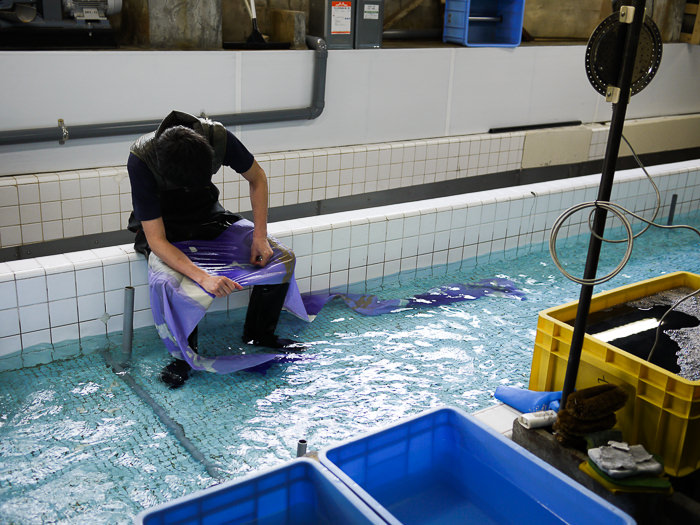 After soaking, he takes glues one by one with a (no handle)ladle.
He says hands always get wrinkly while he’s working in water.
Before I saw this, I thought they removed glues by machines. But actully, those glues are being removed by hand. This is very surprising for me. 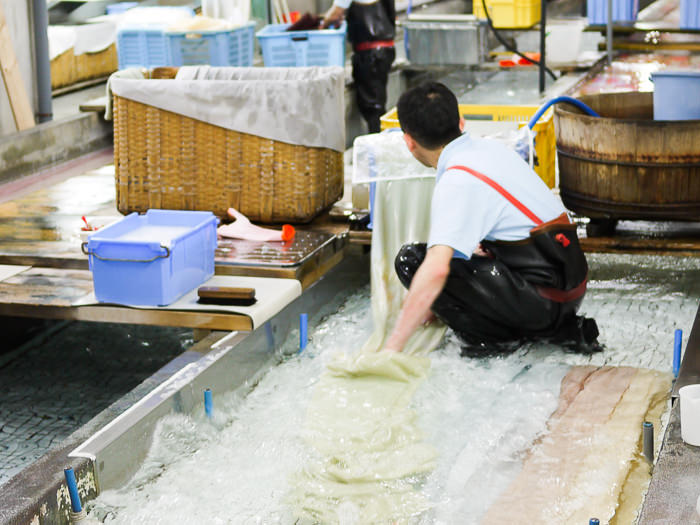 After removing them, put the cloth into water again. 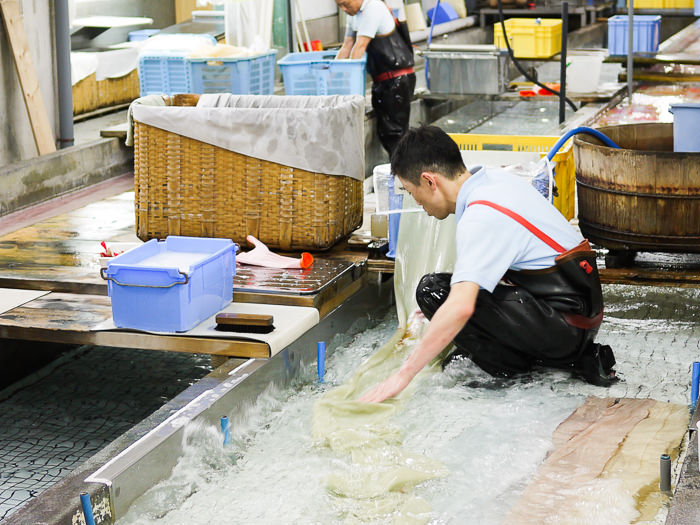 I was wondering why he put them in water again although he already took them away. 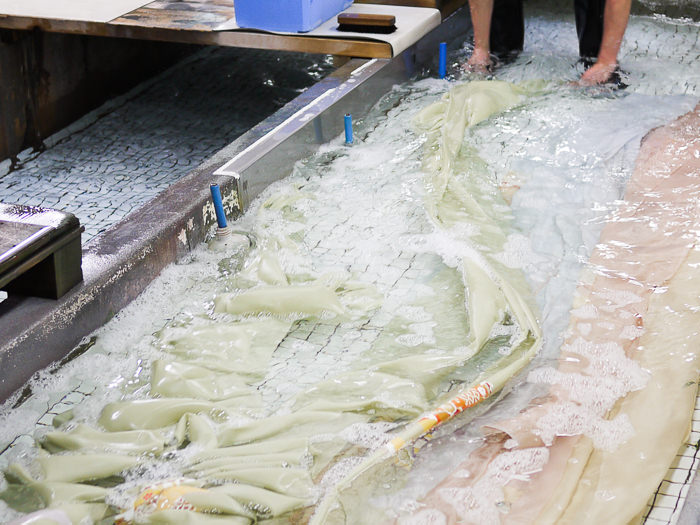 Even though it looks removed, there is still a bit of glues or extra dyes on a cloth.
You can feel they are slimy once you touch them. 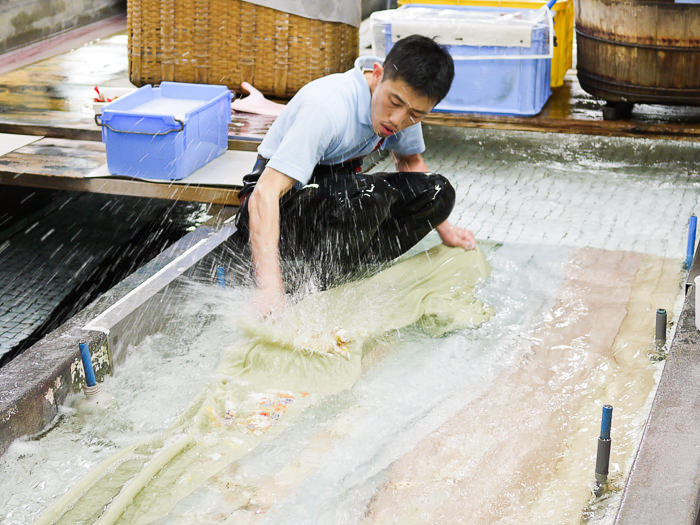 Rub a surface with a brush and take them nicely.
It’s much easier to take them away than you think.

Pull the cloth toward himself by left hand and rub it by right hand. 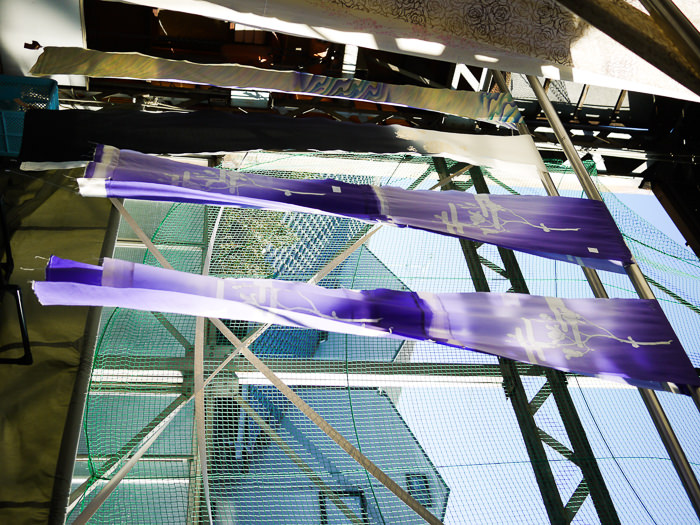 After washing, dry it thoroughly under the sun.
This is everything about washing.

This process of washing is not very good looking one compared to painting designs. However, it’s not able to make our items without this process.

To put it simply, washing is the process to take away glues and extra dyes on silk.
But it is not that simple.
Soaking wet silk is very delicate. It could happen accidents such as

Therefore, this process is one of the most difficult works which need skills and experiences.