Hello. It’s been still hot and humid in Japan. Especially, Kyoto is known as one of the hottest and most humid places in Japan. And it’s true.

Whenever we go to our craftsman’s place in this season, he says “it’s too hot, isn’t it?” before we talk to him.

Anyway, we introduced how we paint patterns in the previous blog.
We have finished painting background and painting patterns, which is already looking great and the works seem to be done.
Yes. Once we finished them, the processes of making item are pretty much done. But contour outlines of each pattern can be unclear especially when there is not much contrast between colors of the patterns and the background color. Then we make the patterns clear by drawing contour outlines using a technique called “gold placing“.

Gold placing is a technique to make the design look more beautiful using metallic foil or powder such as such as gold leaf powder, silver leaf powder, aluminum foil powder and so on with an adhesive agent.

How to place gold

Gold placing consists of many techniques.

This is a basic technique. Literally, “tsutsu” means tubes and “gaki” means drawing in Japanese.
This is the technique when we make pattens(contour outlines, pistils or veins of each leaf) stand out. 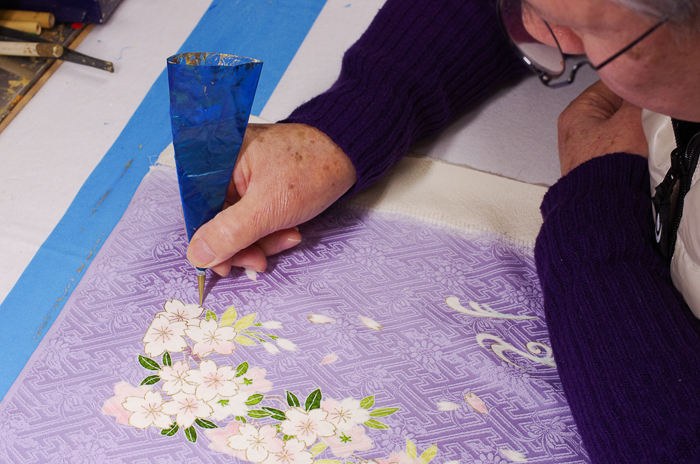 You might think he’s just tracing, but this is a bit harder than you think. That’s because you have to draw the line with the same weight while squeezing the paste in the tube. If you squeeze hard, the paste comes out a lot. 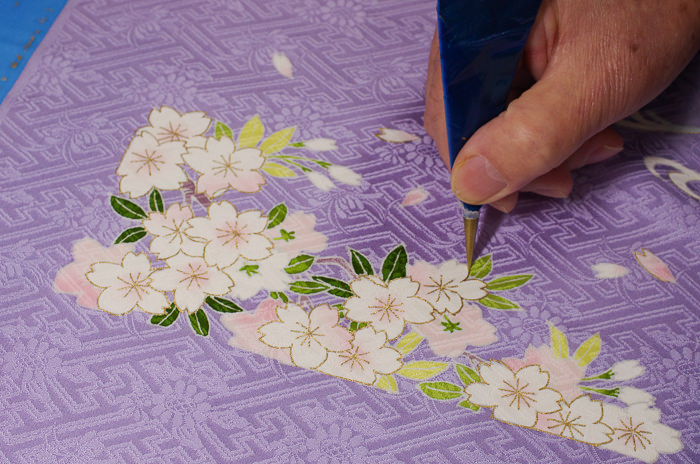 This drawing is pretty fun stuff. 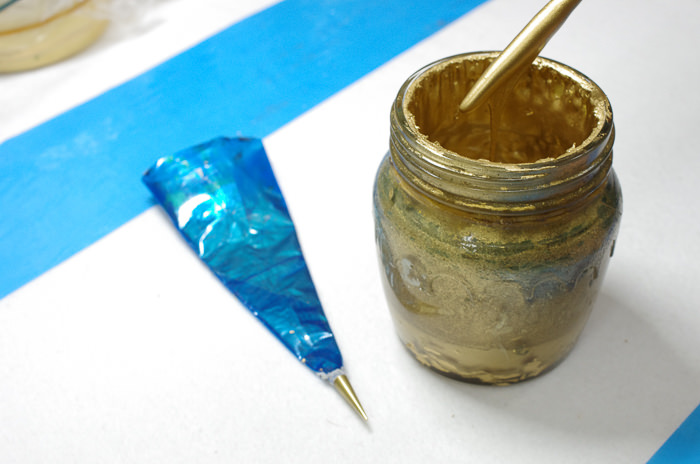 This is the paste using metallic powder with an adhesive agent. We put it on a stick and spin it over and over, otherwise the paste is going to drip. After that, we put the stick into the tube.

Tubes made of bamboo with a mesh of wires on the bottom are tools for Sunago. After metallic foil is cut into small pieces, they put into this tube and then sprinkle on a adhesive agent on the cloth.

This metallic powder is called “Sunago” in Japanese. 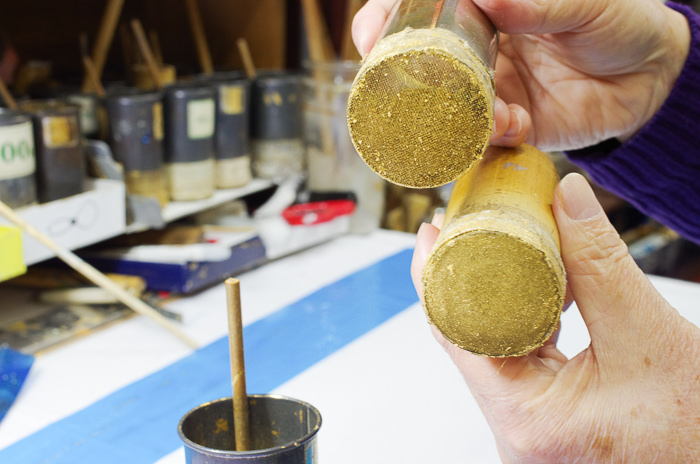 Tubes are often made of bamboo or metal such as iron, copper and so on. 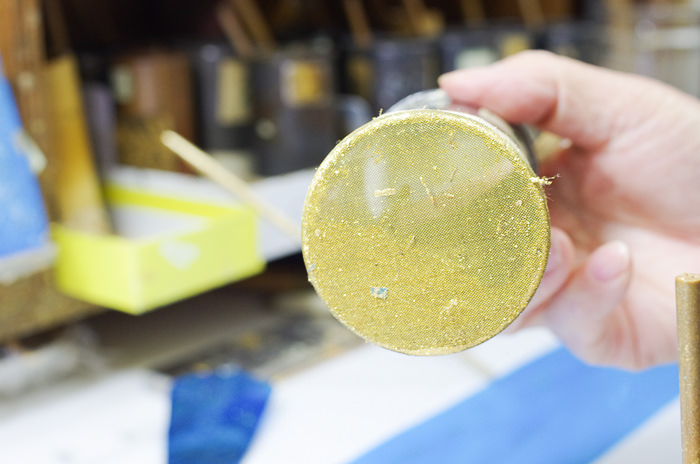 This is a tube with fine meshes. Each tube has its number between 5 and 200 for every additional 10 to 20 numbers.
No.5 has the finest meshes and No.200 has the coarsest ones. 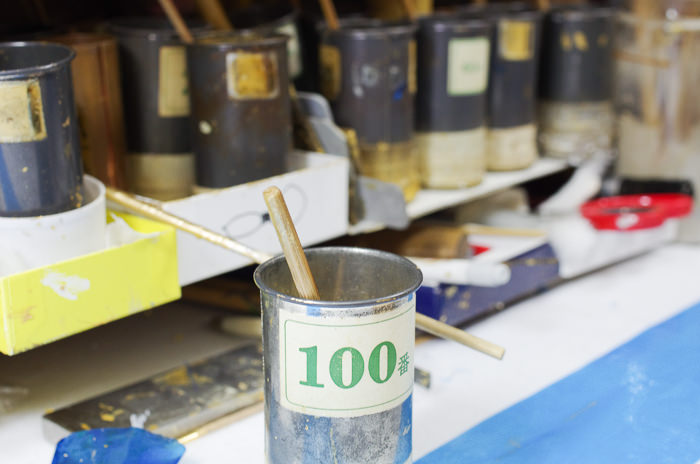 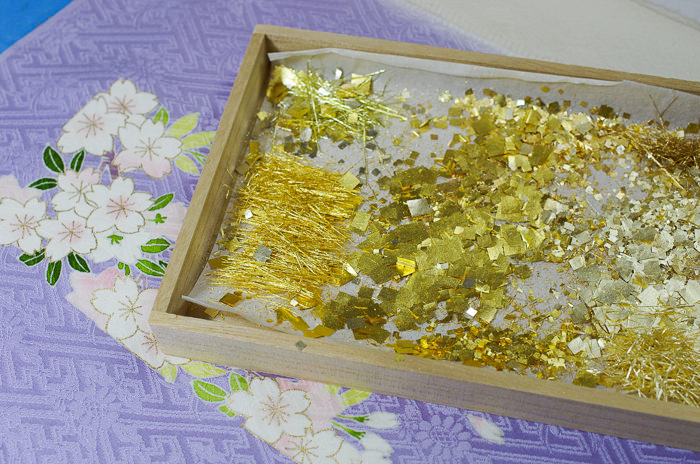 Craftsmen cut metallic foil with exclusive cutters made of bamboo. Gold placing should make items(patterns) beautiful so this is often called “Makeup“. 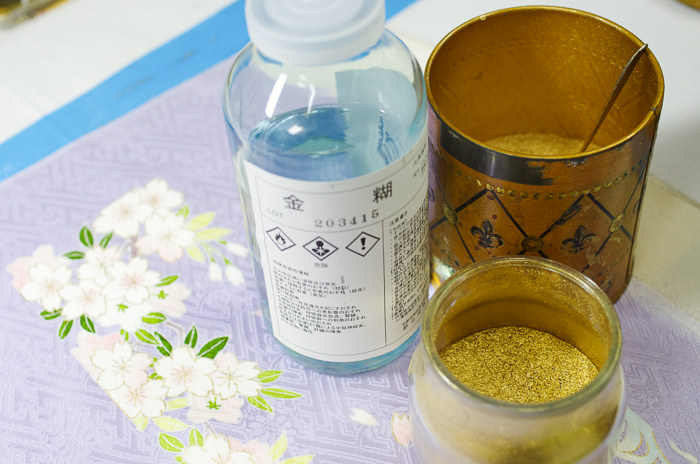 Oshi means “pressing” something and “haku” means foil in Japanese. This is a technique to stick foil/powder on a cloth while pressing them with raw cotton.

At the beginning, we stick a masking tape over the pattern which we want process.
And then we use a cutter to cut the specific part in the pattern.

This masking tape is 0.06mm thin so we need to be very careful not to cut the cloth too. Practice is must to get the hang of it.

Once cutting is done, an adhesive agent is put with spatulas or brushes on parts we cut. 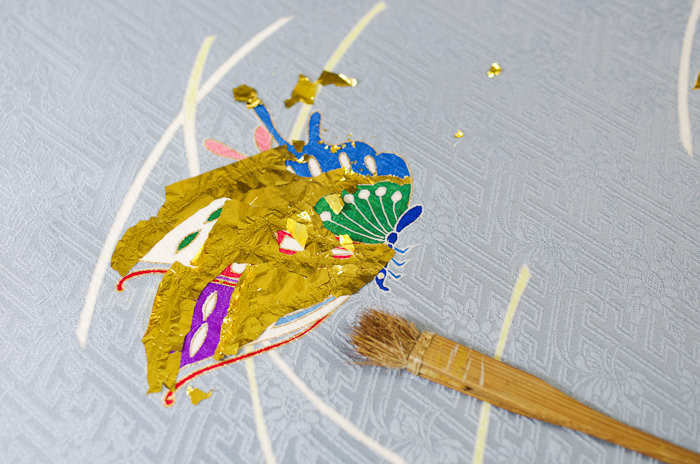 After metallic foil is put like this, pat it with raw cotton in order to make it stick perfectly.
(This is the picture after masking tape is stripped) 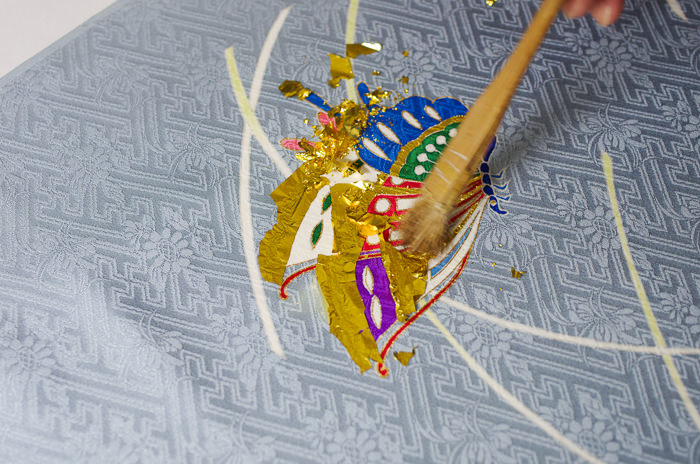 After waiting for all the adhesive agent to dry, we get rid of the parts we don’t need. 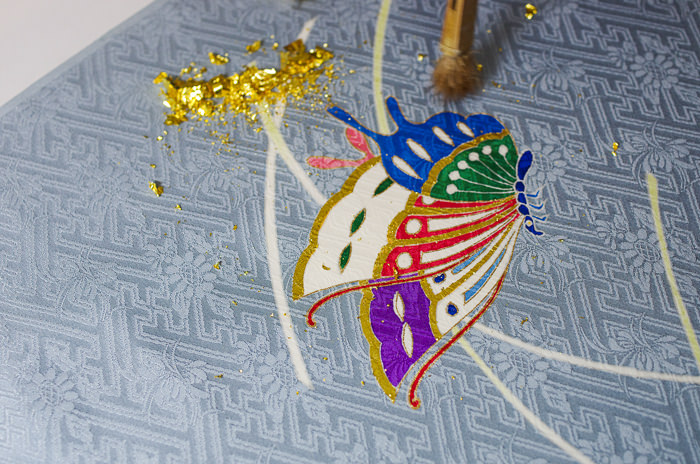 Now only parts that we put the adhesive agent show up.
We don’t throw away this waste of metallic foil. We use it for Sunago later. 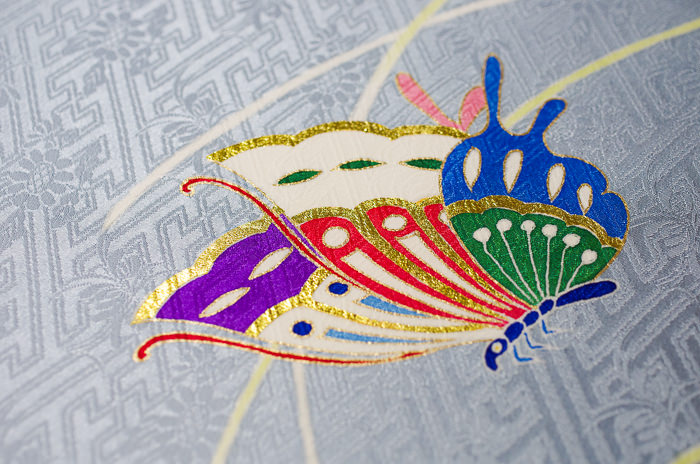 Gold placing is the process to decorate patterns or designs with metallic foil and powder after dyed a cloth.
Of course, the purpose of doing this makes patterns look beautiful, but we need to be careful not to put too much foil or powder because it’s gonna be in bad taste.

The balance or sense of beauty is always needed for gold placing.

Although these techniques we introduced above are some of gold placing techniques, these are the ones we use very often.

At last, craftsman who does this gold placing think of

Doing gold placing needs to be more creative than any other processes.